Eminem, often stylized EMINƎM, by his real name Marshall Bruce Mathers III, born October 17, 1972 in Saint Joseph, Missouri, is an American rapper, producer, actor, and label founder. In addition to his solo career, he is also a member of the D12 group of which he is the co-founder, and composes the Bad Meets Evil duo with Royce da 5’9 “.He was also part of a group named Soul Intent.

Eminem has sold over 395 million records worldwide since July 2019 and is one of the most sold albums in the history of the music industry. He is the largest international record salesman in the decade from 1999 to 2009. Including his work with D12 and Bad Meets Evil, he has twelve albums at the top of the US rankings.

In the United States, Eminem has two diamond-certified solo albums with The Marshall Mathers LP and The Eminem Show, as well as three diamond-certified singles featuring Lose Yourself, Not Afraid and Love the Way You Lie. He has over 600 awards, including 15 Grammy Awards and an Oscar. He is quoted in numerous lists listing the best artists of all time, Rolling Stone magazine has even declared “King of hip-hop.”

Still unknown to the general public, Eminem publishes his first album, entitled Infinite, in 1996. The record is a critical and commercial failure. It is with his first extended play, named The Slim Shady EP (1997), that he begins to break through in certain spheres. He only gained global popularity after the release of his second album, The Slim Shady LP in 1999, the first released on the label of producer and rapper Dr. Dre, Aftermath Records. 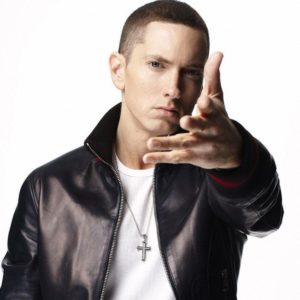 This album earned him his first Grammy Award, the best rap album. He won the same trophy for his next two albums, The Marshall Mathers LP and The Eminem Show, making him the record number of consecutive wins for this award. The rapper goes on in 2004 with the album Encore. After a forced retirement of five years, Eminem returns in 2009 with the album Relapse, leaving behind his drug problems. The following year, he released his seventh studio album, Recovery, which is a worldwide success.

In November 2014 Eminem publishes Shady XV, a compilation to celebrate the 15th anniversary of its Shady Records label. Many Shady Records rappers are present, as well as the group D12. The Marshall Mathers LP 2 was followed by Revival (2017) and Kamikaze (2018), the latter becoming the best-selling hip-hop record of 2018.

Eminem is also an active entrepreneur. He has created his own label, Shady Records (which helped launch the careers of artists such as 50 Cent), a radio station, Shade 45 (broadcast on Sirius XM Radio) and a charitable foundation.

Eminem also began an acting career in 2002 with the role of Jimmy Smith Jr. in director Curtis Hanson’s film 8 Mile. For this role alongside Kim Basinger, he won the Oscar for the best original song for the song Lose Yourself. He becomes one of the first hip-hop artists to win this award. He also made cameos in The Wash (2001), Funny People (2009) and The Interview (2014), as well as in the television series Entourage (2010).

What is the actual or full name of the celebrity Eminem?

The real or full name of the Eminem personality is Marshall Bruce Mathers III.

In which city was born the celebrity Eminem?

The birthplace of the Eminem is Saint Joseph.

In which country was the star Eminem born?

The star Eminem was born on the Continent: American – Country: United States.

What is the nationality of the Eminem personality?

The star Eminem is an American citizen.

When was the celebrity Eminem born?

How old is Eminem?

The Eminem personality is 46 years old.

What is the astrological sign of the zodiac of the celebrity Eminem?

What is the Chinese astrological sign of the celebrity Eminem?

The star Eminem has for astrological sign Chinese Rat.

What is the size of the celebrity Eminem?

What is the hair color of the star Eminem?

The hair color of star Eminem is unknown.

What is the color of the eyes of the celebrity Eminem?

The eye color of star Eminem is Black.

What is the business / activity of celebrity Eminem?

The job / activity of star Eminem is Singer (Music) & RAPPER.