Kali Burns is a professional gym trainer, a fitness model, health enthusiast and an Entrepreneur as well. She is 21 years old and lives in Sydney, Australia. Kali is also a social media influencer. She is a great inspiration for the people who follow her. Kali was a dancer before her career in this field.

At a very young age of 21, Kali Burns has got great knowledge of fitness, health and thoughts. Her journey till here was not easy as she was also a victim of getting bullied. It was too hard for her to handle all those things which happened with her earlier.

Kali Burns has also featured in publications such as Lorna Jane, Trimmed and Toned and many others. Her popularity is also because of her decision of getting active on the social media sites such as Instagram and Twitter etc. As she brought up in Australia, Kali was fond of swimming and dancing from a very young age. She started swimming at the age of 4 and practiced dancing when she was 5 years old.

Kali Burns’ way of giving training of health and fitness to the people is so satisfactory that she also shares enjoyable moments while teaching them. She provides them with balanced and healthy nutrition plan and positive thoughts so they can get inspired from her and continue their aim in life without losing any hope.

Her aim is to guide people to the maximum point so that they get confidence in them, good health and strong and fit physique. She wants to create a community for those positive minded people who has love and passion about the health and fitness.

Kali Burns’ modeling history is quite remarkable as she has been featured in many of the catalogues with different styles of portfolios. Some of the campaigns are:

One of her aim, when she was a dancer was to share her stage with the great Singer and Dancer Beyonce but unfortunately it was not succeeded but she has got no regrets because of the success she has now in her modeling and training field now. 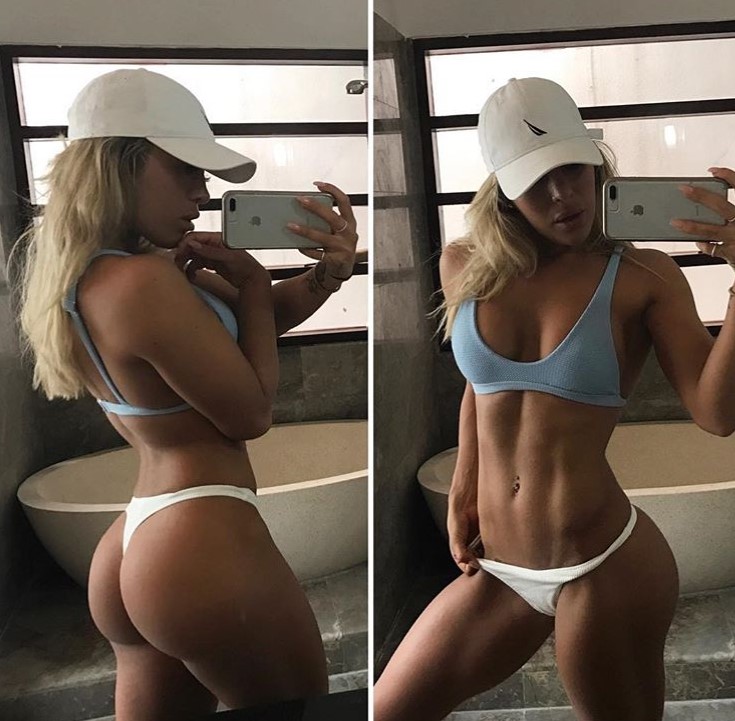 Ability is what you are capable of doing. Motivation determines what you do. Attitude determines how well you do it. Make the choice to succeed and don’t stop working until you do. – Kali Burns

Kali Burns was pretty much active when she was a kid. Her mother took her to dance classes and she enjoyed doing that as well. Everything was going quite outstanding until she got into high school. Kali was bullied really badly and that incident led her towards losing hope. Her mother was also worried about her this condition, as a solution to take Kali Burns out of this situation, she took her out from that school and admitted her in the Arts high school where she had positive minded people like her. This decision turned out to a great one as this brought Kali Burns’ confidence back.

Kali Burns had no friends and direction out of school. Her friends were restricted only till her school. As a solution of this issue, her mother took her to gym and bought a gym membership for her where she started going in almost every afternoon. Kali Burns had no idea what she was doing there but there was a positive feel and strong environment where she enjoyed the most.

Kali Burns learnt exercises by seeing others at the gym. She also took some guides and training from the local coaches out there in the gym and took classes from them. As a result of her training, she started seeing a positive improvement in her body which led her to do more hard work in the gym. When Kali started to transform, she decided to make this sport her passion and get into the fitness world. 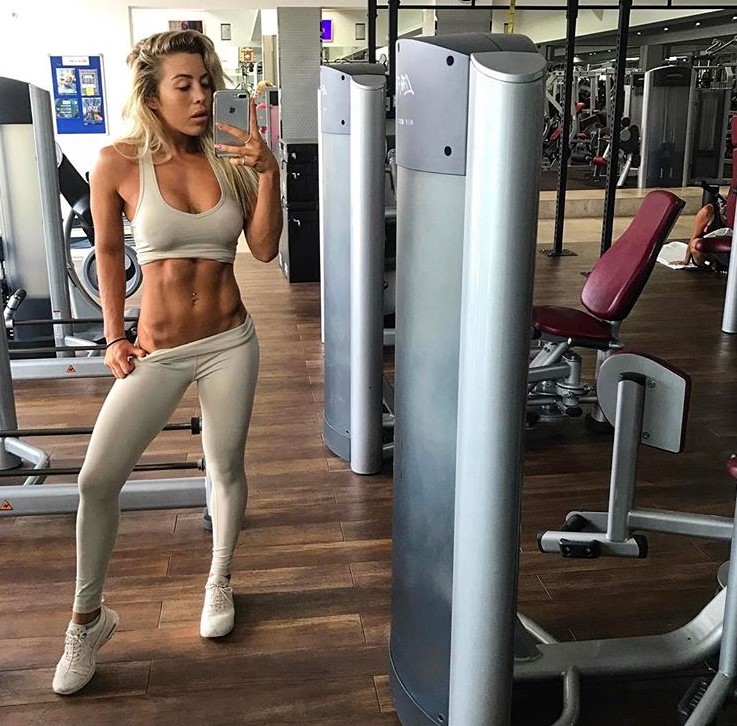 Be stubborn about your goals, but flexible about your methods. – Kali Burns

Kali Burns is a social media star and quite popular in the internet. She has got many fans and followers there who follow her work out exercises videos and tutorials in order to make a beautiful and well toned physique like her. Kali Burns is active on different social media apps which includes Instagram, Twitter and Youtube etc.

Kali Burns has got more than 900k followers on her Instagram account. After getting featured in many of the publications, people started knowing her in large numbers and when she became active here and posted her videos and pictures, it gained the attraction of the viewer on the first go and they started liking her content. She has also got numerous positive reviews and comments on her posts.

Kali Burns has also got followers on her Twitter and Youtube channel where she uploads her work out videos in order to teach others how to do training correctly while having a balanced diet. Kali Burns is a true inspiration for her fans and followers. 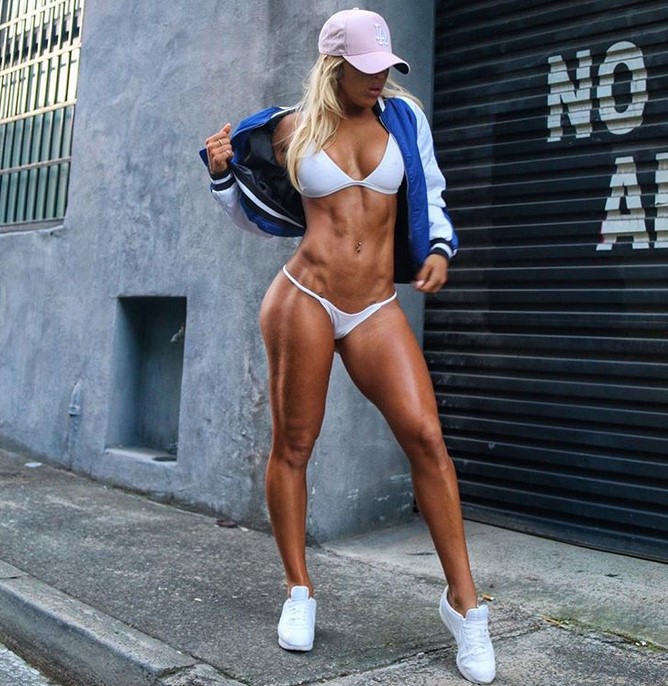 Kali Burns owns a website named “Kali Burns Fitness” in which she got one single program. In this program, she has given everything a person needs in order to be in the perfect shape. This program aims to help a person to lose its body fat and gain lean muscles. Keeping you fit and healthy is just like a priority for Kali Burns. She wants everyone to feel confident about their self and helps everyone in their performance.

What is included in this program?

It is designed specially by keeping the actual body composition of every single person in mind, day to day lifestyle and their goals which they want to achieve.

It is also prepared specially by keeping the actual body composition of every single person in mind, their likes and dislikes of foods. In short, everything a person needs in order to be in correct shape and size.

Weekly checking is also there so that you can see your progress and make some modifications according to it. If somebody is willing to buy this program of Kali Burns, it is available on her website and is available for $299.

Wake up every morning and make one small positive step towards your goals! Get that body moving, eat nutritiously and don’t give up on yourself! – Kali Burns

As nutrition plays a vital role in the transformation of a person, Kali Burns also takes complete care of her diet so that she does not get any unwanted fat that can affect her career if she looks fat.

Kali Burns said that she takes 4 meals in a day and 2 protein shakes with that. Her daily meal has got nearly 1900-2000 total calories which strengthen her hunger and gives her enough energy and power to work out hardly in the gym. 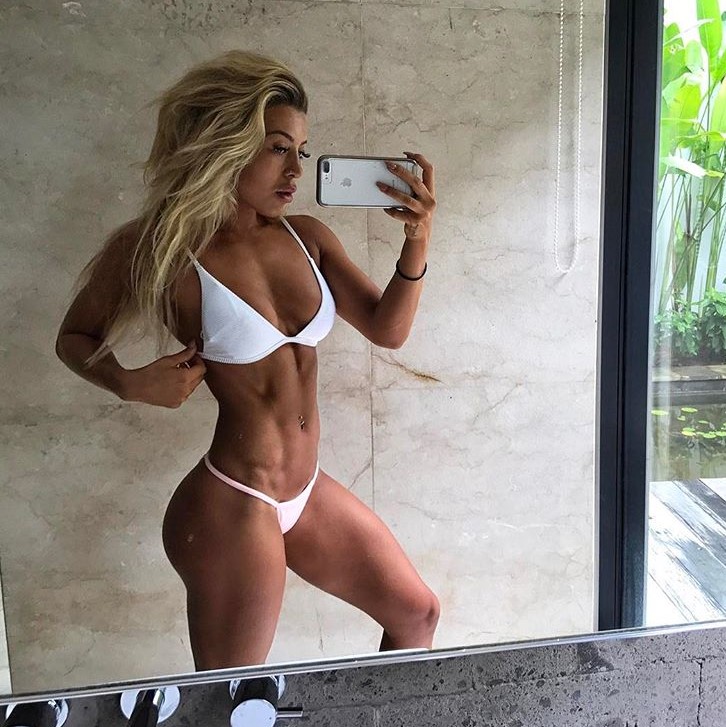 Kali Burns is a hard worker when it comes to gym. She does not only take care of her diet but also does intense hard work in order to achieve her desired goals. Her fitness exercises are followed by many people (mostly her fans and followers and companions in the gym) and they all get benefit from it.

Kali Burns trains for 6 days in a week and sometimes even works out twice in a day. Her training includes 3 to 4 leg sessions (2 of these sessions are compound based in which there is a coach to assist her), the other 2 sessions includes high repetitions. She does 3 upper body sessions also. Kali does not work out on Sunday as she thinks that 1 day rest is also required by our body.

For Kali Burns, her diet and fitness has become her routine as she cannot hide herself from working hard in the gym because of the fact that she has to maintain her well toned physique from any unwanted fat. With it, Kali shows that if u want to achieve something big in life, it is necessary to keep yourself confident and have faith in you.

Despite of all the negativity she faced in life, she came up with more confidence and enthusiasm and proved everyone that she is not less than anyone. Kali Burns’ story is quite impressive and motivational if we look into it and it also teaches us to at least try to reach the desired goal and put your efforts with pure heart. With this you can face any hurdle which will come in your life and also you will feel proud on yourself. Read Also Elizabeth Zaks Fitness.