Nienna Jade is one of the most popular fitness model and actress out there on the internet. She is originally from OC, California. She loves to work out because keeping her body in shape is the first and foremost goal for her. Nienna Jade is very much a diet conscious girl and eats healthy only, ignoring all the junk food which can result to a body fat for her body. If she ever eats something junk once, she works out hard to get rid to that fat.

Nienna Jade is for sure a social media sensation and pretty much liked fitness model for her followers. Her beautiful and wow factor pictures and videos are available on her Instagram ( Social Media app ). Nienna has crossed 1.2 million ( And Still Counting ) followers on Instagram till now.

Her Instagram pictures and videos are so liked and appreciated there that it allows her to do more and more good in her business. Nienna photo shoots and portfolios are so damn sexy and hot that the viewer could not afford to ignore the beauty of her snaps.

Nienna despite of being so much popular and most appreciated model, does not show much arrogance and attitude towards his followers. She feels that behind her success, they are the real ones who always encourage her to do more beautiful stuff than previous and she loves her followers so much.

Nienna being a perfect model, does not promote any extreme kind of nudity in her pictures or videos, however some hot and sexy contents are available on her account and internet. Nienna is also active on other social media app i.e Snapchat. She posts are daily life routine snaps there on public demand. Some of the funny and extreme sexy content of her all time are available easily, she calls it “Sexier side of Snapchat”. 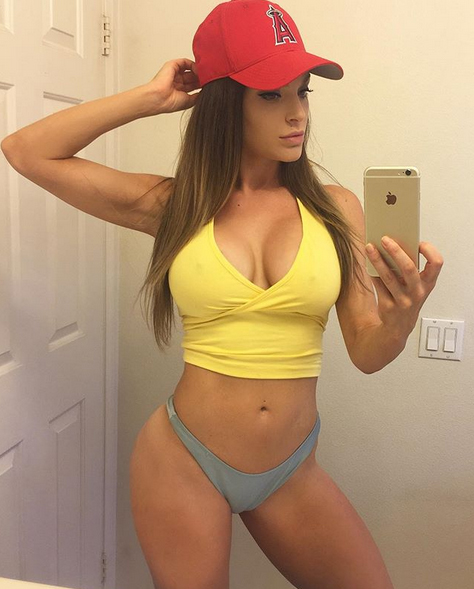 Getting into Fitness Industry:

On asking her about the opportunities of getting here, Nienna Jade claims that her contract with Fitness Gurls was undoubtly a game changer and most exciting step to get recognized as a Fitness model.  She says that she is honored to work with them and there are some upcoming exciting plans to be revealed in future with them (Fitness Gurls). While Fitness Gurls is a magazine which is currently working with hundreds of fitness models and actresses in which Nienna Jade is one of its clients. 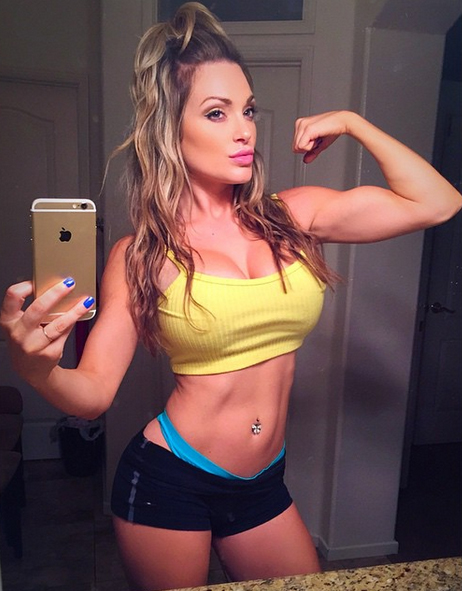 Nienna also went to a trip to Jamaica with Fitness Gurl for a portfolio. She was there for three days with them and did shoot a bit each day. In her opinion, Jamaica was a beautiful and mind blowing place to take pictures and she enjoyed a lot there. Despite of shoots, Nienna enjoyed her leisure time there and did so much fun there by going for snorkeling and feeding fishes. All together, Trip to Jamaica was a memorable one for her. While her trip to Jamaica, working out was an challenging thing for her and she enjoyed her fun time there instead of working out.

Nienna loves to take pictures of her everywhere and she does it from her phone mostly, so her phone is the most important part of her life which she always takes along with her. Nienna took her Bikinis, other outfits, sun block cream, cosmetic and her stuffed toy along with her on her trip to Jamaica.

Answering a question, Nienna says that she would love to visit Santorini Greece which is such a beautiful place to hang out. She added that it is her dream to visit this place and get this photo shoot done there or spending some time on vacation. 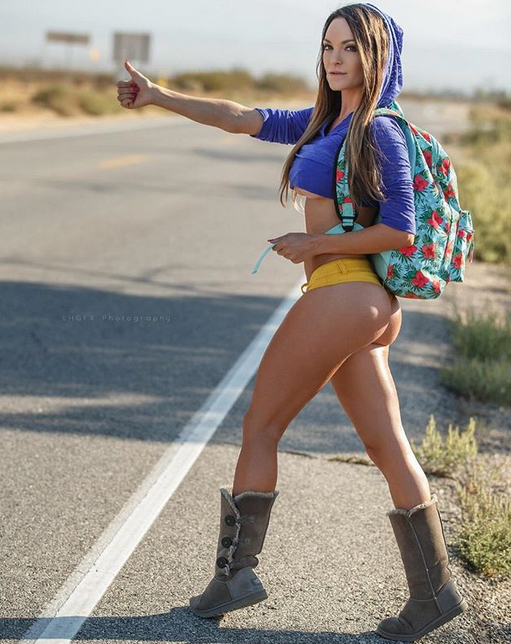 Before getting into this fitness world and modeling, Nienna Jade was a backup dancer. She used to dance behind some popular music artists

Nienna has also hosted events back then. She was a part of hosting side in some famous celebrity events before getting into this business. Nienna’s popularity came into existence when she made her Instagram account. People started liking her content in large numbers and her followers started to increase day by day.

This truly shows that by working hard with good intentions always result in a positive manner. No matter who you are and where you are, if u work hard and believe in yourself, you will always end up doing something big in life.

Nienna Jade workout for 5 days in a week. In her training, she mainly focuses on body building and lifting heavy weights. Nienna feels that naturally built physique is something to cheer about and her main focus is on building strong muscles which she feels that is a big thing near her and always an exciting thing for her.

Nienna Jade loves to work on her lower body the most. She trains so hard on her lower body because the kind of wardrobe she wears, there is definitely a sure shot need of well toned legs. Nienna also feels that she has got some great improvements in her lower body and she works hard in order to achieve her dream body. Still, she is very much proud of her well maintained body. 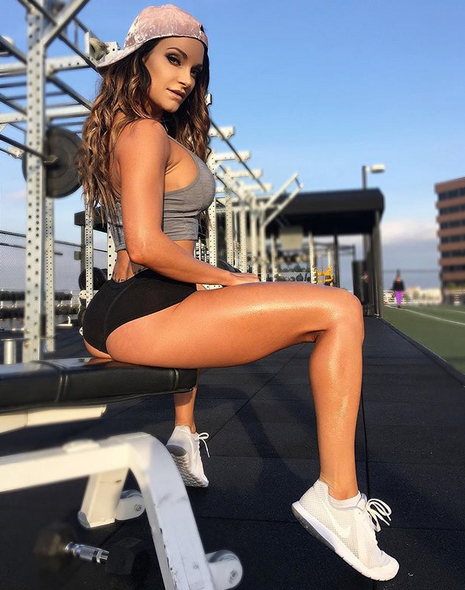 Just at the age of 22, Nienna Jade has got the success of her dream already. Her body is completely out of control and worth seeing. There are 100% chances of people saying a WOW after watching this beauty, but forgetting her face would be injustice to her. With that beautifully maintained physique, Nienna has a beautiful and gorgeous face which attracts the viewer on the first go.

Nienna trains her body five times in a week and completely focuses on getting in fit shape. This fitness freak has uploaded her ultra hot pictures everywhere on the internet. It is not difficult to find her on the internet, Nienna’s topless pictures are not available anywhere on the internet but finding her online is not a big issue at all, just write her name and you are good to go.

Dogs are called man’s best friend and Nienna’s story is always something like this. She enjoys playing with her dogs in her leisure time and takes complete care of them.

Nienna Jade is purely a pet lover. She had 2 dogs named Kenya and Safara. Nienna always loved playing with them. Nienna has her pictures available with her dog on Instagram and she calls them their best friend because indeed a dog is a man’s best friend. 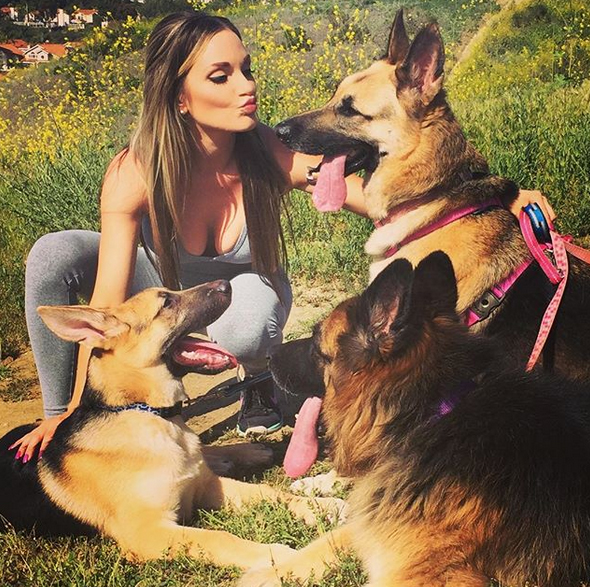 After listening or reading Nienna Jade’s name, “Hot” is the first word which clicks in your mind. You will always find Nienna Jade’s pictures hottest and the sexiest. Nienna is one of the most popular fitness model and actress and style is the first compulsory for her. Her style is quite different and unique from other which is seen in her pictures.

If you will search for Nienna Jade’s pictures, you will end up viewing the hot and sexy pictures on the first go. She is famous because of her sexy style. Those pictures are enough to see her naked because of the fact that she has uploaded most of her pictures in bikinis which shows half of her some private body parts. But these pictures are not the only stuff available, her other pictures of her beautifully toned body is also something to worth watch.

Nienna Jade before joining the fitness industry, worked as a backup dancer and also hosted some celebrity events. But when she got a chance of showcasing herself, she proved herself that there is something attractive in her but influences everyone on the first sight.

Nienna Jade’s struggle is very motivational for those who follows her because she not only does fitness related things but also motivate others by exploring different places all around her country US and show people how to enjoy the life in a proper way.

When she created her first uploaded her pictures, she did not even think of getting this much of popularity from all over the globe but hard work always pays off. Nienna’s hard work out is shown quite nicely in her pictures and her beautiful body has already made 1.2 million people crazy for her.

Nienna Jade is a complete fitness freak and model and her hard work cannot be denied by anyone. There are thousands of pictures available on the internet of her and there will be more content coming up in the future. Nienna can be a true idol for someone and her fame is 100% deserving because of the struggle she has done. Read Also Oksana Rykova Fitness.